176 million women or 10% suffer from Endometriosis worldwide. Take a read, Comment and Share the blog to Raise Awareness!

It all started when I was 13 years old and I got my first period. The pain I felt made me realize that something wasn’t right. After many months of having a menstrual cycle, the pain was getting worse each month. I asked a professional opinion and the answer I got was that I am overweight and that my periods just started so I should give it time. They gave me some painkillers and suggested going on a pill. I immediately started eating healthy and losing weight.

About nine months later, the pain got so bad I couldn’t cope. After many visits to the hospital, they suggested I should try the implant that may help with the pain and bleeding. Sadly, that only lasted three months since I gained a lot of weight and did not take any edge of the pain away. After many different pills, injections and the coil, the doctors realized that it is not just period pain. I was referred to the gynecologist and I got a full checkup and was told that they don’t think it is anything major. They gave me stronger painkillers which helped for a month. 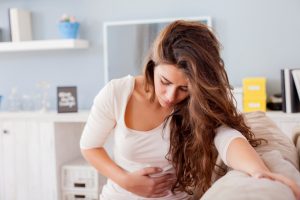 Because of the pain, I was missing many weeks and months off school and work. My bed was my life along with pills. Hot water bottles were my best friend.  I was then referred to a ‘pelvic pain specialist‘ who then said this looks and sounds like a rare condition called endometriosis. They scheduled a laparoscopy in order to see what is going on inside my stomach. It was the scariest day of my life. They indeed found endometriosis in my womb, ovaries and also a muscle leading to my back. It all just came so clear what was really going on all these years. I almost felt closure that this is what is wrong with me and I can now deal with it.

Weeks and months went by and I returned to work feeling positive about this. It wasn’t until the pain started to come back I just panicked and went back to the gynecologist for my 6-month checkup. I explained the pain is back and I’m scared so he started me on 3 monthly injections that would put my body into shock and “shut my ovaries down” as he said. It meant that I would be going into early menopause. It’s now been over 14 months I have been on the injection called Decapeptyl SR 11.25. I have never felt better on it as I do not get as much pain or flare-ups. Every single girl in this world with endometriosis is different and I’m glad I am now getting it under control. There are so many women that suffer alone. I want the world to know that endometriosis is a horrible disease and this is why I want to share my story and I hope to raise awareness about it.

176 million women or 10% suffer from Endometriosis worldwide. Take a read, Comment and Share the blog to Raise Awareness!

Would you consider Hysterectomy if it can help with your Endo? Tell us in the Comments and Share the Blog to Raise Awareness! Source: CureUp
Read more
Uncategorized

Endometriosis is like an Iceberg. An Iceberg has over 90% of its mass below the surface. Meaning that you don’t see 90% of the...
Read more

Growing Up With Endometriosis

Myth: It is just a little bit stronger Period Pain. Take a read, Comment and Share the blog to Raise Awareness! Growing up with endometriosis was...
Read more
Uncategorized

200 million women around the world are affected by Endometriosis. Share and Comment to show your Support!  About 10 years ago, I started noticing the pronounced...
Read more
Uncategorized

When any woman finds out she's pregnant, she will naturally have many questions. However, for the mother-to-be with endometriosis, a condition where...
Read more

When were you Diagnosed? What was your first reaction? Show your support to the Author by Commenting! I’ve been living with endometriosis for 10 years, diagnosed...
Read more
Uncategorized

How much Would you have? I would have $40

People have thought you were being dramatic about your pain - $20 Owning several heating pads - $15 Not being able to sleep...
Read more
Education

Ablation vs Excision in the Treatment of Endometriosis: Which ne is better?

For women with Endometrioses in its most advanced stage, the question arises on which treatment to take: Ablation or Excision? To know which one...
Read more

Watch this video and leave a Comment to let us know who helped you the most in your Journey fighting Endometriosis! Tag them to show...
Read more
Uncategorized

I Want To Be Understood With Endometriosis

Hormonal treatments can help, but cannot cure Endometriosis. Take a read, Comment and Share the blog to Raise Awareness! It started when I was only 12...
Read more
Education

Could CBD Help with Endometriosis?

Endometriosis is a condition that affects females. It is classified as the condition where uterine cells grow outside of the uterus. The...
Read more