Women who suffer from Endometriosis have up to 6 times more chance to undergo multiple surgeries of reproductive organs. Share to Raise Awareness!

My name is Kristen, I’m from Ontario, Canada and I am looking to provide a place where people can come for information, advice, support, and raise awareness about this chronic illness.

I am an Endometriosis and Medical Marijuana advocate. I experienced painful periods from my very first period, I was almost 14 years old and was placed on birth control after my first period. I remember missing multiple days of school when I had my period because my cramps were so bad that I couldn’t get out of bed and could barely make it to the bathroom without crying. I seemed to have control over my symptoms when I was in college and a few years after I graduated.

One day when I was at work I had cramps so bad that I felt sick to my stomach and couldn’t stand. I felt like I was going to pass out so I was escorted to the first aid room where I could lay down for a few minutes to see if I could continue the work day.

As I laid there I only felt worse. I asked a co-worker to drive me home where I could rest but I just felt worse and worse. The same co-worker came to my house after her shift and drove me to the Emergency Room. 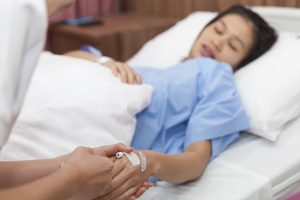 After hours laying in a hospital bed in the fetal position, an x-ray, an ultrasound, and an MRI a doctor told me that I had fluid in my abdomen from a cyst that ruptured and that they would be sending me to a specialist.

When I went to see the specialist she told me that she had a suspicion that I had Endometriosis but would need to do a laparoscopic surgery to be sure. I underwent this surgery in 2010 when I was 21, where I was diagnosed with stage four Endometriosis.

She said that it was the worst case that she had in her career and that she had to cut through multiple adhesions to even see my uterus. After the surgery, I started Lupron for 6 months and it was horrible and didn’t give me any relief if anything made my symptoms worse.

Then I was put on Visanne, which also brought me little relief. In 2013, I underwent my second surgery I decided to have a hysterectomy after which I felt better for 6-8 months and then felt back to the way I had felt.

Women who suffer from Endometriosis have up to 6 times more chance to undergo multiple surgeries of reproductive organs. Share to Raise Awareness!

My Long And Confusing Endometriosis Journey

Heavy and painful periods could be a sign of Endometriosis. Share to Raise Awareness! Ok so here’s my story (please bear with me this will...
Read more
Education

Endometriosis can be a life-changing diagnosis. For some, it is a sense of relief to know why they are having the symptoms...
Read more

Are you suspecting you Suffer from Endometriosis? What are the Symptoms that you have? Share to Raise Awareness! Source: CureUp
Read more

Did this Story Make You Feel Not Alone? Give Thanks to the Author by Commenting below! Two years ago I shared my Endometriosis Story. A...
Read more
Education

Endometriosis is a condition in which excess endometrial tissue begins to grow in places outside of the uterus, such as the fallopian tubes, ovaries,...
Read more
Uncategorized

So we all need some comfort food every once in a while. Whether we had a tough day or just went through a very...
Read more
Uncategorized

When any woman finds out she's pregnant, she will naturally have many questions. However, for the mother-to-be with endometriosis, a condition where...
Read more