For women, many vary diseases tend to share similar symptoms and, without the right diagnosis, the wrong treatment could translate into serious risk for their own health, thus making the cure worse than the sickness. One clear example of this problem is PCOS (Polycystic Ovary Syndrome) and Endometriosis.

Let’s start with something simple: What is Endometriosis, and what is PCOS? Endometriosis is a condition in which the endometrial cells, which are associated with sexual hormones and are released from inside the uterus during menstruation, start to grow at an abnormal rate outside of the uterus, placing themselves in other delicate areas of the body like the fallopian tubes or the lymphatic system and, in extreme cases, even the brain.

PCOS, on the other hand, is a condition in which the ovaries are not stabilized and, thus, produce more hormones than the body needs to function properly and this causes changes that can vary from drastic weight changes to heart diseases and diabetes.

Although both conditions develop first in the ovaries, the symptoms vary greatly between them. Endometriosis is hard to diagnose at its more early stages because pelvic pain is the first signal of its existence, but this is usually associated with traumas or normal muscle pain in younger women who exercise and can be easily overlooked by doctors. Menstrual periods more painful than usual, cramps, discomfort in bowel movements and infertility are other symptoms, but this manifest themselves when the disease is in its second or third stage. 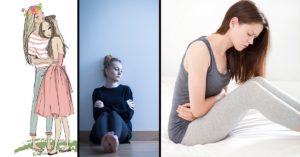 PCOS has more explicit symptoms, but this is more severe even in early stages:

Both of these conditions can be treated, although they cannot be completely cured. There are both medical and surgical options, and the use of the last one is determined by the severity of the stage in which the condition was diagnosed.

Endometriosis is treated with pain medication and hormonal therapy. Ibuprofen is the most common pain medication prescribed, although in some cases, it does not have any effect on the patient and more strong analgesics are prescribed.  The hormonal therapy helps regulate the rate at which endometrial cells are produced, thus reducing endometriosis’s growth exponentially. Surgeries are usually executed on women who want to get pregnant, but in the case in which the conditions has heavily spread a hysterectomy is recommended.

PCOS is treated with birth control pills, patches, or vaginal rings. These are designed to boost the production of female hormones, thus counteracting the effect of the male hormones the PCOS generate. These can also regulate ovulation and reduce the excessive hair and weight. For PCOS ovarian drilling is the most common surgery, a procedure where tiny holes are made in the ovary with a laser or thin heated needles, to restore normal ovulation.

The Most Ridiculous Things Someone Has Said About Endometriosis – Part 2

We recently had a poll on our Endometriosis Support group asking what the most ridiculous things that people said to them...
Read more
Education

Women with endometriosis can experience infertility. Endometriosis is the medical condition wherein cells similar to endometrial cells appear in the female reproductive organs such...
Read more

How did your condition begin and progressed to where it is today? Show your Support by Commenting! I started having horrible periods when I was...
Read more
Education

Intimacy during first-time sex should be an exhilarating experience. Intimacy and Endometriosis are two words that are not compatible - they cannot go together at the...
Read more
Uncategorized

What helps you with your Period Cramps? Show your support by Commenting! I am currently 21. I’ve always had severely bad periods, they lasted 7 days with...
Read more
Education

How did your condition begin and progressed to where it is today? Share this blog to raise awareness! Source: CureUp
Read more
Uncategorized

Endometriosis Took my Happiness Away

What was your biggest Challenge with Endo? Show your support by Commenting! My journey starts when in 2007 I had an ectopic pregnancy where they had...
Read more

Our Facebook group is sharing lots of different remedies, new treatments, and even simple tricks that can help! Here are 3 of our favorite tips shared on our Facebook...
Read more
Uncategorized

My Journey with Endometriosis

How were you diagnosed with Endometriosis? Share your story in the Comments! My name is Becky. I am 26 years old. I was recently diagnosed...
Read more
Uncategorized

Surgery is a solution for removing scar tissue and Endometriosis lesions, but the outcome greatly depends on the stage of the disease and the...
Read more